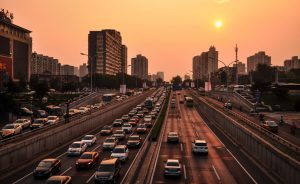 On several occasions, I’ve had to explain Net Neutrality to non-technical people, and while I can sometimes get people to understand the arguments, the abstract nature of the issues make it difficult.

Fortunately, I love analogies—particularly when I can do horrible things like rhyming analogy with neutrality along the way (although I still think that slant rhyme shouldn’t be allowed in poetry). I think I have a concrete analogy that should make sense to most people, and is a close proxy for the Internet—toll roads (so not only a concrete analogy, but one actually made out of concrete!).

Consider a normal toll road. If you want to drive on the road, you have to pay a smallish fee. Every car that drives on the road is charged the same fee, but larger vehicles have to pay slightly more—usually based on the number of axles on the vehicle. Other than that, there is no difference between vehicles—if you drive a Porsche or a Subaru, if the car is blue or green, if you have a pro-Democrat bumper sticker or a pro-Republican bumper sticker—it doesn’t matter.

It also doesn’t matter where your trip started or where it is going to end—so long as you pay. Everyone is treated the same.

This is a bit like a net-neutral Internet connection—you pay a standard fee, and no matter who you are and what sites you go to, everyone is treated the same. If you have a server that generates a lot of traffic, you might have to pay more for that traffic, like the axle fee. For consumers, though, there is generally no difference (unless you have a limited plan, but even then, you just pay more for more data—more traffic).

In theory, though, a toll road doesn’t have to be neutral…

Many toll roads are owned by private businesses. Let’s suppose that the owner of the toll road wants to make a bit more money. If so, there are a lot of different things he might do.

For example, he may assume that drivers of sports cars have more money, so might want to charge those cars more money. This could work, but people with more money are also more likely to make a fuss. “What do we get for our extra fee?” they might ask.

“Well,” says our toll road owner, “How about if sports cars pay more but can go faster?”

“Awesome—sign us up,” say the sports car drivers.

But, thinks the toll road owner—let’s call him Gerald—he seems like a Gerald. But, thinks Gerald, what if I only let sports cars go in the fast lane, and make the other lanes slower? Put in a bunch of traffic cones and make the speed limit 20 miles slower for non-sports cars?

This sounds stupid, but this is exactly what a lot of Internet providers did before net neutrality rules were put in place—and is likely something they will do again now that the rules are gone.

Knowing Gerald, he’ll probably also increase the amount he charges everyone else as well—after all, he has to pay for all those extra traffic cones.

This is annoying for everyone (except the sports car drivers), but it could be worse. For example, suppose Gerald also owns a Toyota dealership. Because of this, anyone driving a Toyota is allowed in the fast lane, but everyone else has to go slower. If you really need to use that road, perhaps you’ll end up having to buy a Toyota from Gerald.

Again, this is something else that Internet providers love—“speeding” up their own traffic by slowing down everyone else.

Of course, even though Gerald owns a Toyota dealership, it’s possible that, for a fee, Honda and Ford might also get the fast-lane deal for their drivers—that’s okay for Gerald as well, since he gets paid either way. Or, perhaps, he’ll route Toyotas to the fastest lane, have a mid-speed lane for sponsored traffic, and the slowest lanes for everyone else.

Let’s take a brief detour to discuss choosing other options. One of the arguments for getting rid of net neutrality is that competition will do a better job—after all, who would drive on Gerald’s road if Peter’s road has better rules. Better still, you can just take public routes.

For roads this may not be an option—either there are no other roads, or the other roads are significantly inferior—slower or further out of the way.

For the Internet in America, 40% of people only have a single choice for broadband—there’s only the one road. As for public roads—in 20 states, municipal broadband is either blocked or outright illegal. The extra dollars that telecom companies are earning are apparently going straight into lobbying. 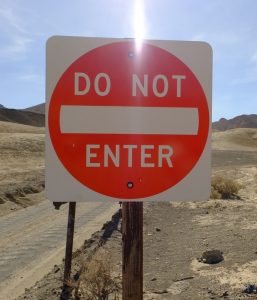 So far, we are just talking about some inconveniences, but it could be worse. What if Gerald doesn’t simply push certain brands into the slow lane, but bans them altogether? You may love your vintage Datsun truck (yes, I used to own one of those), but if you are not allowed to take it on the road, it isn’t very useful (to be fair the idea of taking my Datsun truck onto a highway would have terrified me).

So now Gerald has a couple of options—he can ban you, or he can slow you down. He can also reroute you! Maybe you are on your way to dinner at a fancy restaurant, but Gerald has just bought an Arby’s franchise, and so he forces all cars to detour next to it, and maybe sets up a traffic light that makes you wait there for a while.

If you are stubborn, you can get to where you are going, but it is always a bit harder. On the Internet, this can be much worse. Imagine if, every time you tried to go to Pinterest you were instead redirected to Amazon, or a site called PPinteresting, that is sort-of like Pinterest, but a little bit different. Close enough that you might not notice. Instead of a mohair wig, maybe you get one made out of mole hair.

So far, we’re assuming that Gerald is just out to make a buck, but what if he is also getting into politics? After all, the wrong party might put rules in place that stop Gerald from choosing which cars can drive on his road!

So, now, instead of just limiting traffic based on brands, he installs equipment to read your bumper sticker. If you have the wrong bumper sticker, then straight to the slow lane for you—or off the road completely. Or, how about this—if your bumper sticker is wrong, you are forced to sit in front of a billboard for the opposing viewpoint for a few minutes before you can get on the road?

Of course, not everyone has a bumper sticker—Gerald might need to search your car, look at your Facebook posts, your e-mails, your buying history, and your browsing history. He can do this because you are forced to sign a little 62-page EULA he hands you at the booth before you can enter his road.

Okay, I’m stretching things a bit, but on-line this stuff is all pretty standard. After all, the traffic is all going through your ISP, so its not hard to do all of this and much more.

I’ve taken this analogy about as far as I can, but, on-line there are far more evil things that I could do. In fact, this article has given me a whole long list of ideas—if I owned a telecom. And I were evil.

By the way, I don’t think telecoms are evil. That is because, unlike the supreme court, I don’t think companies are people. A person can be good or evil—a company is generally amoral. If the purpose of a company is to make money, then questions of morality just generally don’t come up in the same way.

I don’t think we would ever accept Gerald’s roads. Private toll road owners are generally constrained by state laws (net neutrality for roads?), although the prices are often set by the owners, and, in fact, there are a fair number of issues with toll roads.

Somehow, though, it seems reasonable to a lot of people to allow for far worse practices on-line.  I think that this is largely because lobbyists have done a great job in muddying the waters—implying that net-neutrality is anti-competitive, when it is clearly the opposite.

What is obviously missing is a really good analogy.

3 Comments on “A Net Neutrality Analogy”