Arlen Posted on October 18, 2022 Posted in Writing No Comments 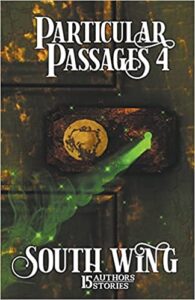 My story Swapping Up just came out today in Particular Passages 4. (For some reason the link for the ebook is different. It will hopefully fix itself).

This is a quirky story of which I am very fond. (Am I allowed to say that? Will my other stories be jealous?) A janitor wakes up in the body and life of a major movie star and he has to figure out who he is (literally and figuratively).

I liked the idea of putting an honestly good character into highly tempting scenarios and seeing how he’d react. This story is written in present tense, which I don’t do often (aside from anything else, editors seem to hate it), but it helps create a dreamy feeling that worked better for the not-quite-sure-what-is-going-on-edness I was going for.

…Okay, fine, I will speculate–usually the first and last stories in a collection have to be strong (the first gets your attention and the last is what you remember). So, I am going to pretend that the editor liked both stories enough to give them prime position (and I won’t ask him, in case he says ‘oh, it was random’ or ‘oh, I forgot to put it in, so I just shoved it at the end’).

But the reason I mention this is that in a four book series, I have the first story and the last – I am (currently) the Alpha and Omega of Particular Passages! (Cue lightning). My obvious super-villain task at this point is to prevent Sam Knight (the editor) from ever doing another one, but I won’t because a) I’m a very lazy super-villain, b) I like Sam and c) He might want to buy other stories from me in the future.