The other day, w 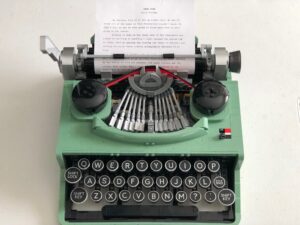 e were shopping for a birthday present for a friend and decided on a particular Lego set. We join the scene in progress:

Arlen: Are you going to order it on-line?

Anna: Or I could just run up to the Lego store…

[Ten minutes later Arlen & Anna are in the car, driving to the Lego store in a mall an hour away from home.]

So, we bought the set for our friend (Lego Flowers) and then spent quite a long time deciding which sets that Anna and I would get for ourselves (as a reward for virtuously getting a gift for our friend). Anna got the Medieval Blacksmith Shop (which she is building as I type this) and I got the typewriter.

One thing that was really nice about the Lego store is that all the employees were Lego fanatics. We spent a lot of time discussing different sets and generally geeking out over the merch. They also sell loose pieces, motors and other stuff.

The typewriter is exceedingly cool! When you press a key, the typebar jumps up and the carriage moves to the side with an appropriate clicking sound: 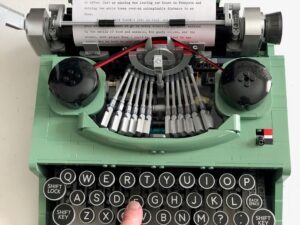 When you get to the edge of the page, you have to push the carriage return over to return the mechanism to start typing. You can really feed paper into the platen and the guide lifts and closes in place. I suspect that the ribbon is not a piece that Lego uses on any other set, but I think the other pieces are all standard Lego. (Okay, maybe not the keys with the letters–although the Titanic used the same pieces for the little sign that went with it).

My only complaint is that the mechanism tied to the keys isn’t quite heavy enough, so the keys don’t always return to position–unless this is a clever way of simulating stuck keys! I temporarily fixed the problem by adding a couple of pieces of Lego and a chunk of earthquake putty, but I plan to 3D print a better solution (possibly with some attached metal for weight).

This one is definitely going to have a permanent spot in my office. And I need to stay as far away from the Lego store as I possibly can…