Arlen Posted on July 5, 2022 Posted in Writing No Comments 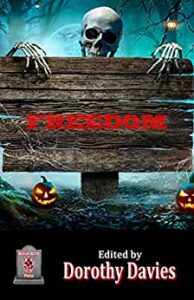 My story R.I.P. just got published in a new anthology! The story was originally published in Ink Stains magazine in 2019.

The theme of the anthology (and its name) is Freedom, and the topic works well for R.I.P. which is about a zombie that “wakes up” in a coffin, which limits his ability to cause much mayhem. Spare a thought for all those poor zombies buried too deep, ghosts haunting buildings that no one bothers to visit, and vampires who live near the poles and have to sleep away half the year.

This is the first time I’ve had a story reprinted (other than by the original publisher for year-end or best-of collections) which is pretty cool. My story is also the first one in the collection, which either means that they thought it was good or that having a name starting with the letter A has once again worked to my advantage!

The editor is based on the Isle of Wight and also runs an antique shop (since publishing anthologies is not known to be a particularly lucrative career path). I’ve always wanted to visit there, and now I technically know someone on the island.

The Kindle version of the book is available on Amazon, but the paperback (and hardback!) are currently only available from the company’s website.