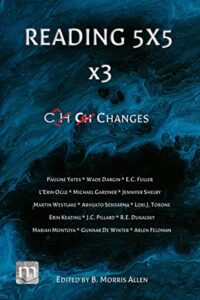 One of my very first story sales, way back in 2018, was the story Graveyard–in Metaphorosis magazine. Recently, the editor of Metaphorosis wanted to try an interesting experiment–to publish an anthology of stories both as they appeared in print and as they looked before any editing, and mine was one of the stories that he selected for the collection, which just came out today.

Going through the process of preparing the story for this new anthology was interesting. Amongst other things, I had to go back and reread the original version. The changes suggested by the editor definitely improved the story, but it is subtle–a lot of the text is exactly the same. I also remember arguing with him about the physics involved in the story (I won those arguments :-). I also noticed a fairly glaring error in the final version that fortunately got fixed here. Despite everything being metric, I had one person standing a couple of feet behind another. Fortunately the editor allowed me to get rid of this imperial incursion!

Having sold a bunch of stories now, I realize how unusual Morris’s (the editor’s) approach is–in the vast majority of cases, the edits are minimal to non-existent (The story in Gilded Glass that just came out being a notable exception).

It is very nice to have three stories (R.I.P., Skin Deep and Graveyard) come out more-or-less back-to-back, even if two of them are reprints. Actually, I suppose it is better to have reprints, since I get paid for stuff that I’ve already written! And yes, there is one story called R.I.P. and one called Graveyard, which might imply a certain morbid fascination on my part, but Graveyard is actually a straight-up sci-fi story about a monument found on an alien planet. Of course, some of my other stuff might be considered just a bit dark…