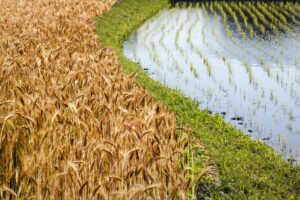 My story Farmers just came out in Little Blue Marble on-line magazine! It is a global-warming story that follows a couple of farmers, one in South Dakota and one in Bangladesh, as they handle environmental changes over the next twenty or so years.

When I was young, I used to write a fair amount of stories, but I mostly stopped when I began working full time. A couple of years after I left Cherwell, I heard about a contest looking for stories about global warming and wrote Farmers as an entry. It was the first story I’d written (or, at least, finished) in years. It didn’t make it anywhere in the contest, but I’m happy that my “first” story has finally found a home in Little Blue Marble.

Another thing–this is also my first sale at “pro” rates, the minimum per-word amount that SFWA (Science Fiction Writers of America) expects a writer to earn in order to consider them a “professional” writer. I’ve come close a couple of times, but I think that this will count. Not sure if I want to be considered a “professional” at anything, but still pretty cool!

One depressing thing–when I first researched this story, it took place over a longer time frame, but as more cheerful IPCC reports kept piling up, I had to shorten the estimates for when various effects could be expected. I still think that this story is inherently optimistic, though.