Arlen Posted on October 18, 2015 Posted in Other No Comments 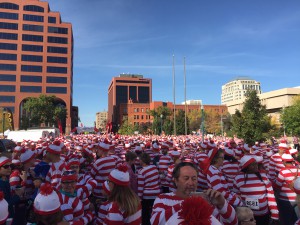 Yesterday (Saturday, October 18th, 2015) was the 2015 Waldo Canyon 5K run – a run to help fund recovery from the Waldo canyon fire of a few years ago.

As you can probably tell, the official uniform of the run was a Waldo costume – about 4000 Waldo-clad people entered this year, including myself, my wife, my sister, and a number of friends.

Although some of my friends actually “ran,” that is an activity in which I only engage when being chased by rabid dogs, so I walked, and finished in about 45 minutes.

The event was a lot of fun, and there were food trucks, games and various other forms of entertainment on hand. Below is a picture of our group: 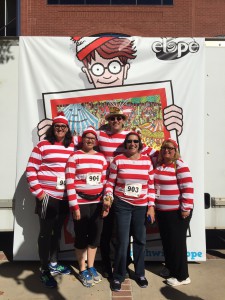 Although I wore the striped shirt, I felt like a boater was a better look than the standard bobble hat, since I felt like I should be punting down the Grand Canal in Venice. Alternatively, it sort of felt like a mass jail break. I have trouble telling people apart at the best of times, so with everyone dressed in red stripes, it became virtually impossible. Fortunately, my boater stood out well enough that people could find me.

There was a drone floating overhead, presumably taking pictures (or looking for the one actual escaped prisoner): 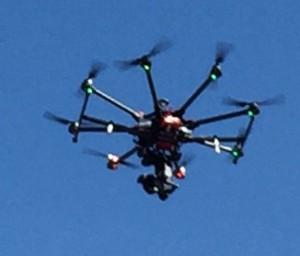 Having seen enough videos on how hard these things are to fly, I’m glad this one never accidentally dive-bombed the crowd! Sorry for the poor quality of the picture, but it was hard to catch with my iPhone.