If you are going to wear a mask, it might as well be a digital mask, right?

I got the idea from an on-line video from the owner of a company called Lumen Couture, and ended up ordering the same flexible LED strips that she used. It took a couple of months for them to arrive, but now I have several, which will likely show up in a few different projects!

The woman from Lumen Couture also provided a pattern for making the mask, but it was not great. Fortunately, Anna is really good at such things, and she came up with a version that worked well (my contribution was to cut out pieces of paper in various ways to see what shapes would work, and then to hold still while Anna pinned things to my face–at least she didn’t use staples this time).

The tech itself required very little work. The panel connects to your phone via Bluetooth. It lets you use the sound bars as above (be grateful you can’t hear me singing to activate it), put in text, or choose from a few built-in animations:

The video came out a big dim. It is brighter in real life. You can also create your own still or animated images:

This is my attempt at drawing a mouth using their, to be honest, fairly horrible interface. An animation is made up of a series of still images, as you’d assume, but if you create the still images first, you can’t use them in the animation. I ended up having to recreate all of my images in the “proper” place–there is no copy, no import, and the app has a habit of bringing up random error messages in Chinese. Here are the lips in the editor: 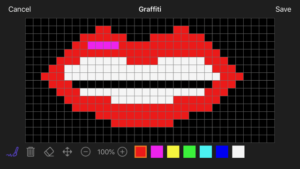 I wore the mask to the store yesterday, and was roundly ignored by everyone except one little girl. Of course, I’m usually ignored, but I was at least hoping for a look of disgust from the other shoppers. Ah well.