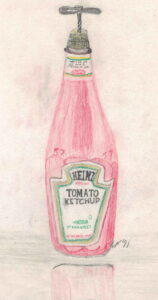 We’ve been going through some stuff that’s been in storage, and that includes a few of my old “art” sketch books.

When I was younger, my friends and I would drive around singing musicals (yes, we were that cool), and then would often end up at an all-night restaurant and sit and talk and write and draw. There is some really good art in some of my sketch books–largely because some of my actual artist friends would sometimes use them.

But, for whatever reason, I seem to have spent a lot of time drawing ketchup bottles. As a model I suppose they have a few things going for them–they tend to be present in restaurants, and they mostly stay still (baring the occasional need to apply to food).

This one seems to have a corkscrew. I have no idea why. Maybe it’s a propeller, which would make more sense.

I like this one because it is so fat: 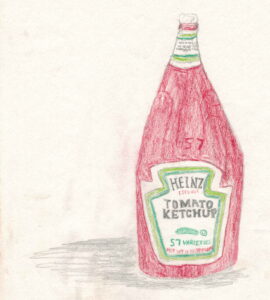 I’d like to think that I was making some sort of cool artistic statement, but it is more likely that I just let the proportions get away from me (a problem that is visible in a lot of my art)!

Here’s a black-and-white one: 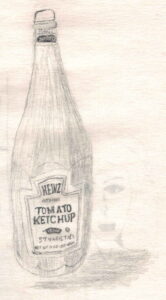 And just in case you think I’m a one-trick pony, here’s a Coke can for variety: 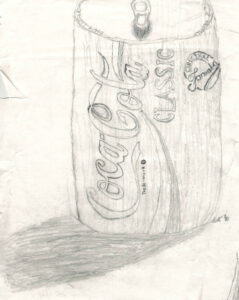 That at least qualifies as Pop Art.