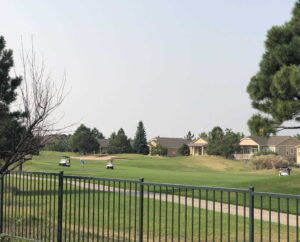 Our house backs up to a golf course, which is kind of nice, since it means we have an open space that won’t be covered in houses–giving us a nice view of the mountains and Pikes Peak.

Well, it would give us a nice view of the mountains, except that there are a bunch of wildfires burning across the state–the haze in the picture is from the fires, even though the closest is about 150 miles away, and the big one is more than 300 miles away. Our friends in Denver are telling us that they are having to keep their windows shut (with 100°F temperatures) and are bodging together filters.

Anyway, one side effect of living near a golf course is that we tend to get a lot of golf balls hitting our garden/deck/house: 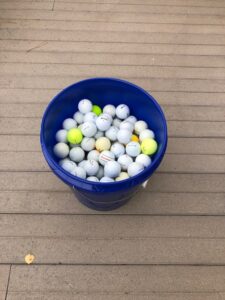 That is a 5-gallon bucket of balls we’ve collected over the five years or so that we’ve lived here, at the rate of 1-3 a week during golfing season (whenever that is). In fact, when I went out to take this picture, I found another golf ball. At one point I was building a pyramid of them, but it collapsed under its own weight–proving, I think conclusively, that the Egyptian pyramids must have been built by aliens.

The ones that land in the garden (balls, not aliens) are fine–although they can scare the various bunnies that run around the neighborhood. But the ones that hit the house can be, uh, startling–as in, causing people to jump and express themselves in the grandest Anglo-Saxon terms.

It is an open question as to whether the balls hitting our house are due to really bad golfers or really good golfers who know we live here.

So, at the end of June we had a pretty big storm–tornado warnings and (this is relevant) golf-ball-sized hail! I was going to include my photos of this taken before we scurried down into the basement to hide, but apparently my phone ate the photos. However, here is a link to a video that was taken on the same day by someone else in town. It is a bit further south, but similar to what we saw (although the sky was a bit more swirly where we were).

I enjoyed the mental image of a really dedicated golfer attempting to play through the storm, trying to figure out which was their own ball. I’m evil that way. I’ve also considered building a pneumatic cannon lined up with the closest hole to return the balls while people are playing. I may or may not have purchased some of the parts for such a cannon.

In the weeks after the storm, roofing companies swarmed locust-like through the neighborhood, and we decided it was worth at least checking our roof. The insurance company confirmed we needed a new roof (one supposedly more hail-resistant), and also noted that a couple of our solar panels had been damaged: 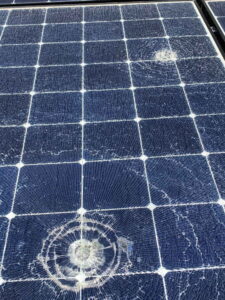 It is actually quite a pretty pattern (though there are some pretty scary scorch marks on the other side). So, same storm with golf-ball-sized hail, same insurance coverage, right? Nope–the adjuster looked at the golf course and decided that this damage was obviously caused by real golf balls rather than golf-ball-sized objects falling from the sky.

The insurance company did pay to remove and replace all of the panels for the roofers. The company that did that work managed to find replacement panels for us on the East Coast, which was apparently a lucky find. Our panels are about two years old, which in solar-panel years means that they came across the plains in a covered wagon. We had to pay for the new panels and the shipping (which might have been faster had a covered wagon been available), but it was still a lot cheaper than the second deductible we would have had to pay.

As an aside, what with pandemic, 100°F temperatures, wildfires, tornadoes, and golfers, it does seem like the planet is trying to tell us something…