Bunny II – The Wrath of Bunny 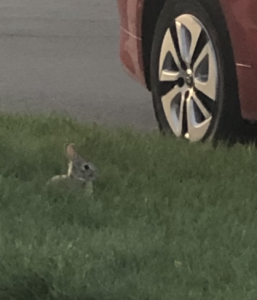 A couple of weeks ago I posted about the bunny that had invaded Anna’s car and chewed up the wiring. Since then, Anna has been paranoid about bunnies anywhere near her car–even after dousing the car with the mint scent that was supposed to put them off.

Yesterday, Anna needed to move her car off of the street back into the driveway (moved for painters, can’t be left on the street because of the evil HOA). After a while I realized that she had been gone for quite a long time…

When I went out to see what was going on, I found her sitting on the driveway glaring at the baby bunny that was sitting a few feet away from her car.

Naturally, as a caring husband, I made fun of her. The bunny going into the car was obviously a fluke. There was no way it would happen again. You know, just trying to be supportive.

I was told to watch the bunny while she went to move the car. When she got close, the bunny, of course, ran under the car and did not run out again! Nor could it be seen under the car.

Okay, so maybe it could happen again.

Anna decided to drive the bunny to a distant park before trying to get it out (her theory was that it was a baby of the one that is currently chewing its way through the cars at the dealership). So she drove off, trying to make the ride as uncomfortable for the bunny as possible so that it wouldn’t have time for a snack–hard stops, random acceleration, a bit of weaving.

Fortunately she didn’t get pulled over. I could just imagine the conversation:

She drove several miles away and then pounded on the bottom of the car until the bunny jumped out and ran off. As far as I know it didn’t take the alternator or any other components with it. She also found a fair amount of rabbit fur stuck under the car. Possibly the rabbit equivalent of tramp-marks: nice warm place to sleep with delicious cables here.

4 Comments on “Bunny II – The Wrath of Bunny”