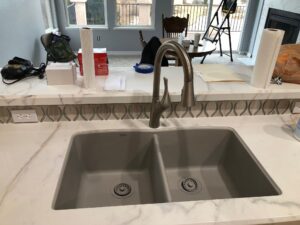 My mum got new counters and sink for her new house, which meant that the faucet needed to be installed, and all of the plumbing stuff done underneath. Quote from the plumber was $700+, with the understanding that it could go higher. We were slightly horrified.

To be fair, it wasn’t just installing a faucet. There was a leak from the cutoff valve, and a new waste-disposal to install. Also, because the drain on the new sink was further back than the old one, there wasn’t actually space for the trap (there was a clean-out that pushed everything too far forward).

We were still horrified.

So we decided to do it ourselves. Turns out that plumbing is a lot like playing with Lego…well, you generally don’t cut the Lego pieces down, and you rarely get wet with most Lego sets. But other than that, quite similar. Strangely, I now have an urge to see if I can build a working fountain out of Lego…

Anyway, here are the results of our plumbering: 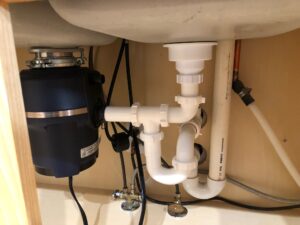 It doesn’t look like much, but it doesn’t leak! The plumber who came by to hook up the gas looked at it and said that we did okay.

And, once I swapped the lines, the hot came out of the hot side and the cold out of the cold side.