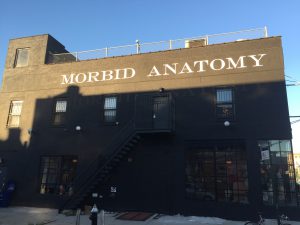 The last time we were in New York, we went to the taping of a radio game show called Ask Me Another, which was a blast, and I highly recommend.

However, we got to the place (a pub called The Bell House) a bit early, and so we decided to wander the neighborhood. It was fairly industrial, with auto-repair places, etc., but down the street from The Bell House was a museum called The Morbid Anatomy Museum. With a name like that, naturally we had to go in!

It turned out that it was primarily a taxidermy museum, with nineteenth, and early twentieth century animals. Yes, it was every bit as creepy as it sounds, although interesting as well, in a car-crash sort of way. They had various large animals and birds on display, along with a section they called “crap taxidermy” where bad taxidermists accidentally created entirely new species. Sadly, I apparently didn’t take any pictures of those.

They also had a large section of dioramas. Pride of place went to “The Kittens’ Wedding”: 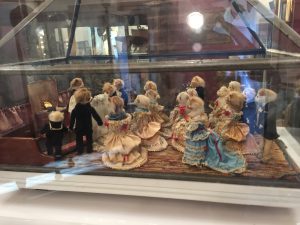 This was made in 1890 by Walter Potter, who was apparently quite famous for such things. I can only assume that all of the kittens died of natural causes before being added to the display. The card with the display makes a big deal of the dresses, talking about the Bride’s dress of cream brocade, with a long veil and orange blossom. They probably brought in Robin Leach for the commentary.

There was also this one: 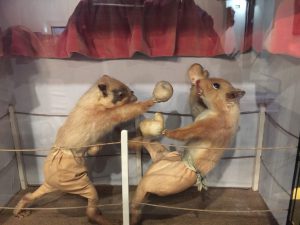 This one seems quite suspect to me, though–everyone knows that weasels are bare-knuckle boxers, so I think that this might be fake.