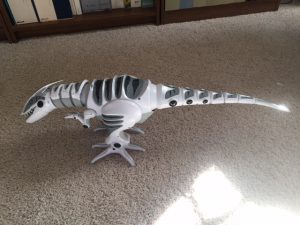 My sister came to me with her defective dinosaur. She had bought it on sale, then discovered that it was missing the cover to its battery holder. 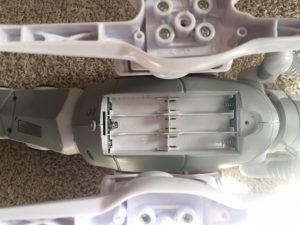 It would obviously be inconvenient if the batteries fell out while in the middle of eating tourists or stalking small children (I assume that is what she got the dinosaur for–I don’t like to ask). She asked me if I could 3D print her a replacement, and I, picturing a simple rectangular battery cover, agreed. To be fair, I’ll agree to 3D print almost anything–If I can come up with a few hundred useful things, I might eventually be able to justify buying the thing!

My first sense of impending trouble occurred when she delivered the dinosaur, along with a battery cover from a second one that she also owned (don’t forget that raptors are pack hunters). It was not a nice, simple shape, but looked like this: 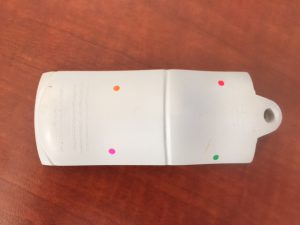 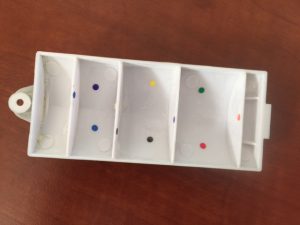 (Ignore the colored dots for the moment). It is a little hard to tell, but not only is this cover covered in curves, but the top curves in two directions! I have some basic CAD skills, primarily using FreeCAD, and can make squares and circles with the best of them, but I couldn’t figure out how to model the fancy curves. I considered taking a few on-line courses (vs. my usual technique of random clicking in the UI until things start working) but decided that I was too lazy.

Fortunately, our local library 21C, has a maker space! Aside from a number of 3D printers, laser cutters, a CNC machine, sewing machines, etc., they also have a NextEngine 3D Laser Scanner. This is not your grandfather’s library!

One of the makers-in-residence, Daniel, spent several hours walking me through the scanning process. This was what the process looked like in my head: 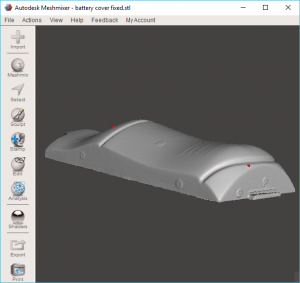 I should mention that I basically went through this entire process 3 times before getting a successful scan. The first two times, the model was very messed up–messed up to the point that when Meshmixer tried to fix it up, it found about 7000 errors, then crashed! I finally realized that the problem was that the cover was too reflective, and so ended dipping it in talcum powder, which fixed the problem. Note also that you can actually see the colored dots are part of the model–the laser has no problem at all picking them up.

I could have used Meshmixer to clear off those dots. Also, the hole for the screw that holds the cover in place was mostly filled in, and I could have fixed that too, but I figured that the dots weren’t that big a deal, and it would be easier to just drill out the hole after printing, since it was a one-off. Here is the final printed cover: 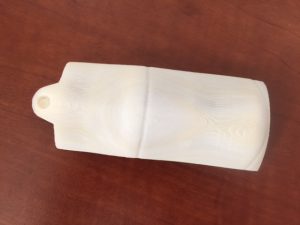 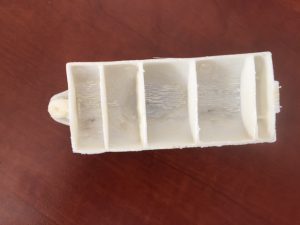 This is actually my test print. The final was done at higher resolution, and took about 8 hours to print (vs. about 4 for the test print). The roughness you see on the inside is because I had to print scaffolding, which I generally hate to do–Cura (and most other) output programs just don’t do a great job with scaffolding, and it is a royal pain to remove it. I ended up breaking one of the cross-supports while removing the scaffolding the first time and had to do another print.

Here is a shot of the battery cover in place, and the dinosaur ready to wreak havoc amongst the populace (as soon as it manages to get off of its back): 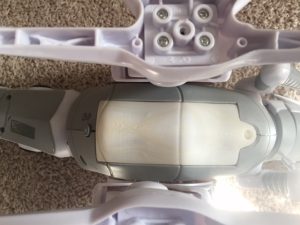