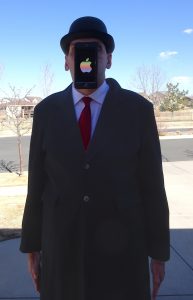 Another silly costume for Karval Kon! Grandson of Man is my take on Son of Man, by Magritte, although possibly better known from The Thomas Crown Affair.

We didn’t get a good shot of the costume at the con, so I put it back on and we played around until we got a decent shot in the front of the house.

I did cheat a bit, and increased the brightness on the Apple logo – naturally went with the old-school version, before Apple became evil.

And, in case you are wondering, the only piece I actually had to buy for this was the red tie, which came from Goodwill! 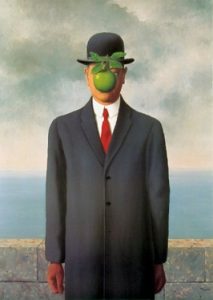 I’m thinking that this is not a bad look for me, though–Anna took a picture of me while I was checking the picture on the computer: 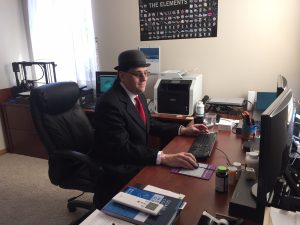 Maybe I could become a spy and wear this all the time? My grandfather, who was a big fan of hats, would probably approve.

2 Comments on “Grandson of Man”