Sparks in the snow

Arlen Posted on February 21, 2018 Posted in Travel No Comments 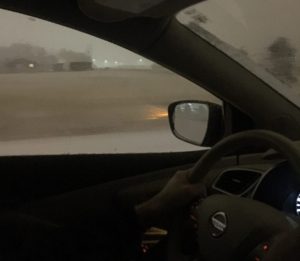 Was driving home the other day when I suddenly noticed that sparks seemed to be shooting out of my side mirror!

After a moment, I realized that it was the turn-signal on the mirror reflecting off of the snow, which was coming down pretty heavily.

There is an animated GIF below which shows what it looked like in motion. It was a bit more impressive when we were heading south rather than east, but I wasn’t willing to circle around just to get a better shot!

And no, I did not take the picture or the video while driving–Anna did that from the passenger seat.