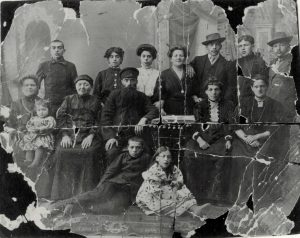 To me, this is just a stunning thing to see. There are no dates, but I’m guessing that this picture was probably taken in the 1860s, either in Poland or in Russia. The oldest generation in this picture could have been born 200 years ago, in the 1810s or 20s.

It looks to me like this picture is actually a picture taken of a fairly damaged earlier photo or daguerreotype. Unfortunately, the names of the ggggrand-parents and gggrand-parents are not listed, other than as “grandmother, grandfather, great-grandmother and great-grandfather”–but they are listed that way in relation to my grandmother Polly and her sister Edie (who was the mother of my sick cousin). Several of the other relatives are labelled more explicitly though, and they are people that my mother recognizes as great-aunts and the like. There was a guide drawn on the envelope:

We don’t know who drew this either, but it is possible that it was drawn by my grandfather Nat (married to Polly) — it looks sort of like other things he has drawn and might be his handwriting.

It is amazing to see something like this, but also frustrating to not know anything more about it–the names of all the people and their stories, or even when and where the photo was taken.

Update: Lots of comments and communication about this photo from various family members. The baby Lily (Sheldon, née Herskine) was born in 1909, so the photo must be around 1910, and the relationships were off by a generation. The older couple in the front are merely my great-great-grandparents, probably just going back to the 1850s-1860s. The man on the top-right with the hat who is labelled “Jack, Lionel & David’s father” was called Alec.