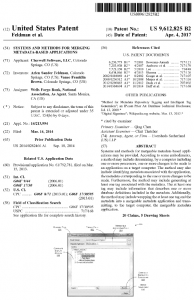 Well, I officially now hold a patent – US Patent #9,612,825 – Systems and Methods for Merging Metadata-Based Applications! I wouldn’t bother reading it if I were you–I wrote the thing, but after the lawyers were done with it, I barely understand it!

The application took about three years, and is good for 20 years, by which time the technology on which it is based will be moldering deep in a landfill somewhere.

There are goodish reasons in our industry to get patents, and I am proud of what we’ve done, but I have to admit that I am generally not in favor of software patents. I’d happily give mine up–if everyone else would give up theirs at the same time :-).

There are a lot of problems with software patents as a breed:

I could keep going, but there’s a lot of stuff on this already out in the world.

There are probably a few ideas in the software world, mostly related to really complicated algorithms, that might deserve some sort of protection (although 20 years is probably excessive). Even in those cases, I’m not sure that patents are the right approach.

One thing that did surprise me–there is a cliché of patents being granted because of overloaded clerks who don’t understand them. In this case, the examiner for this patent had a very good understanding of the concepts and prior art, and raised some really good points. I think his name was Albert something… (Actually, to give them their due, the examiners were Qing Chen and Clint Thatcher).

For my part, I extracted a promise from my partners that we wouldn’t use any patent in my name for “evil.”

I also have to admit that, despite all of this, getting the final approval did make me grin a bit :-).

If I should labor through daylight and dark,
Consecrate, valorous, serious, true,
Then on the world I will blazon my mark,
And what if I don’t and what if I do?