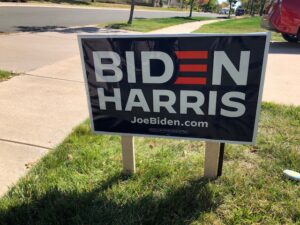 Early on I decided to generally avoid politics on this site. I do occasionally go on rants about patents and the like, but mostly I use this site to talk about fun or interesting stuff I’ve seen or done.

So, if you are looking at the picture on this post and thinking, “he’s finally cracked–prepare for a full-on political rant,” you are at least half wrong. This is not about politics, but about political signs–and even more specifically, about sign supports.

A few days ago I went and picked up yard signs for some various candidates. I won’t say which ones to avoid any hint of bias.

The signs are generally two-part things–a two-sided printed plastic piece–essentially a thin plastic bag–and a wire “n” shaped piece that sticks in the ground over which the plastic piece is slid. 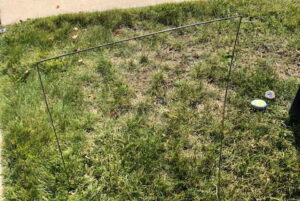 It is a little hard to see, but the picture above shows the wire holder. And, frankly, this design is pretty horrible. It is not particularly stable, and if your yard is hard and uneven (like ours) it is hard to make it look right. The sign was all warped and wrinkled.

This was annoying, and made more annoying by a neighbor up the street who has a much fancier sign with a hanging banner (and for the same candidate, yay!). My first thought was to go online and find one similar. Anna, however, had a better (and cheaper idea)–just make a better support.

So I spent about an hour in the garage and came up with: 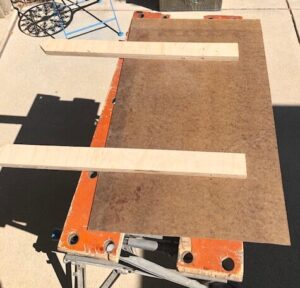 Now, I know what you are thinking. That took an hour? Well, it was hot, and I had to find and cut the various pieces, and dig out some appropriate screws, etc. And did I mention that it was really hot?

Anyway, this ended up being much more stable. I also found an iron spike in the garage and added that for extra measureI think it looks much better, and it also has that traditional signy feel to it.

By the way, if you look at the picture of the wire frame, you may notice two painted stones: 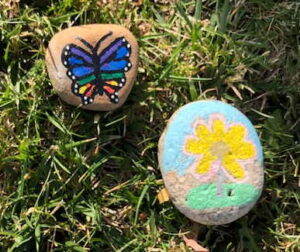 I have no idea where these came from, but they are pretty. The bottom-right one appeared about 3 months ago, and the butterfly showed up about two weeks ago. I choose to believe that they are here because somebody likes us, rather than as signals to an elite hit squad. 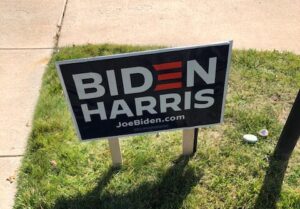 Technically, you could argue that the sign has two political posts…