Arlen Posted on December 3, 2015 Posted in Other No Comments 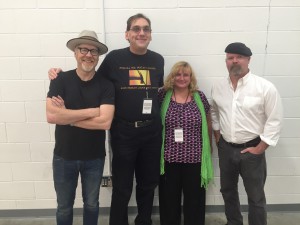 We met the Mythbusters!!! Yesterday, Jamie and Adam’s final tour came to Denver, and we had passes (along with about 80 others) to go backstage to ask questions and pose for photos.

As for the show itself – it involved videos, demonstrations and talks on different subjects. One of the more impressive sections was them showing a series of explosions from the show, but with the sound equipment tuned (apparently with much help from Dolby) so that you could feel something of what the actual explosions felt like.

And, for the finale, Jamie brought out a paintball super-machine gun (I think it shot 500 rounds per minute), and shot at a volunteer wearing a suit of armor! Although they didn’t do this at our show, here is a link to a video of a machine the Mythbusters built to paint the Mona Lisa using paint balls in less than a second!

Adam also confirmed that they had just finished filming the last episode ever of the show. The final episodes will begin airing in January. Sad, but at least they got to control the show’s ending, rather than a network deciding to cut it off with no warning.