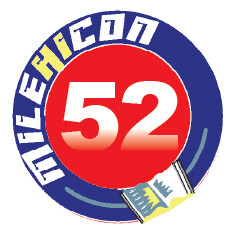 MileHiCon is the oldest Sci-Fi convention in Colorado, and one of the oldest in the world (The 52 is a bit of a hint there). I’ve been involved with MileHiCon for many years. Most years I am on panels, and at random times I’ve helped out in a spear-carrying capacity.

There is also quite a bit of incestousness between MileHiCon in Denver and COSine, a much smaller, newer convention in Colorado Springs (that I currently co-chair).

What with the world being on fire and all, we ended up postponing COSine for a year, but MileHiCon, like a number of other conventions, made the decision to go virtual.

MHC 52 Virtual is going to be held this coming weekend (October 23-25), and still has the same slate of Guests of Honor that were planned for the live show–authors Cory Doctorow, Mur Lafferty, Rebecca Roanhorse and artist Alan Pollack. There will also be a number of local authors, scientists and various other knowledgeable and interesting people. But one advantage of being virtual is that there are also a number of previous guests who wouldn’t be able to come IRL, but can come virtually, such as SP Somtow and Barbara Hambly.

But this is the scary bit. There is going to be both recorded and live programming at the convention. No one had any experience dealing with live virtual programming at this sort of scale, myself included. However, I apparently impressed everyone with how well I expressed my profound ignorance, and suddenly got volunteered to handle live virtual programming for the con :-o. Believe me, I did my best to weasel out of it, but they promised me a cool hat…

So, next week I will be doing a blog post on one of two topics. Either a) How cool it is to run a virtual convention, and my really amazing tech or b) Week one of my exile in a bear-infested cave, away from any technology more advanced than a 300 baud modem.

In addition to Zooms wrangling, I am also on a few panels at the convention: