Letter to US Patent Office Director

Arlen Posted on February 18, 2019 Posted in Patents No Comments 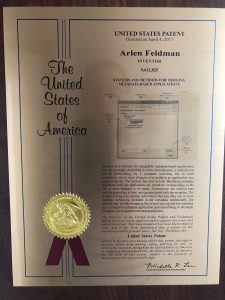 Last week, the EFF (Electronic Frontier Foundation) sent a letter to the director of the US Patent and Trademark Office, Andre Iancu, and I am one of the cosigners of the letter.

I will probably be talking a lot more about patents (particularly software patents) over the next few years, but I can tell you that the system is broken.

The patent office grants incredibly vague, non-innovative software patents all the time (which is hardly surprising, given that the average patent application only gets about 19 hours of review before being granted). Companies then use these patents as bludgeons against small companies. More than 80% of patent cases last year were filed by patent trolls who don’t create anything–they just shake down companies–most of whom cave, because it is too expensive to fight.

There have been a number of court cases in the last few years that have improved the situation, but there is a big fight to try and undo this progress, both in Congress (that whole pro/con thing is a bit confusing) and in the patent office. There seems to be a genuine lack of understanding of the damage that these patents cause.

And yes, as you can see from the picture, I am also a holder of a software patent (and have another pending). This may seem a tad hypocritical, but in the current environment, they serve a defensive purpose (and only a defensive purpose). I would happily give them up in exchange for fixes to the system.