Anna and I and some friends drove up to Wyoming on Sunday, and on Monday morning found a great spot in the park in Riverton, Wyoming. This was a great spot–not hugely crowded, but enough people to make it a truly shared experience.

Where we were, the total eclipse started at 11:39 and lasted for about two minutes, and was truly awesome–in the original sense of the word. It got noticeably colder, and you got a real sense of our puny place in the universe.

The crowd cheered when the sun disappeared, and cheered again when it came back. We all knew it would come back of course, but, well, you never know–that would have been a really bad time for the universe’s operating system to crash.

The great picture of the eclipse is not mine, but by another friend, John Hellyer, who attempted to get to Torrington, Wyoming, but didn’t quite make it because of traffic (although he obviously made it into the path of totality). We had no trouble with traffic on the way up, but got stuck in several jams on the way back, and didn’t get home until around midnight.

My pictures were terrible. This is the best one I managed: 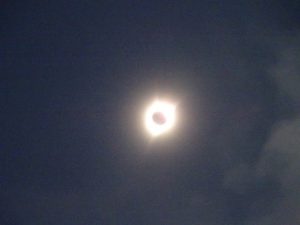 Although I did end up with one very cool shot into a close-by parallel universe: 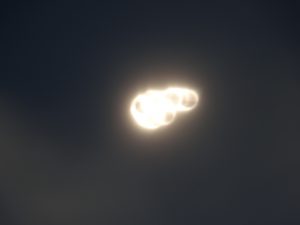 Glad we’re not orbiting that star!