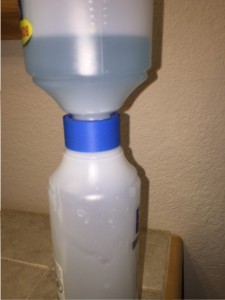 It’s been a while since I’ve talked about what I’ve been doing with my 3D printer, so I thought I’d do an update.

I spent some time going through a series of exercises with FreeCAD, and printed a bunch of cool, but not totally useful things. The picture on the left is the first “useful” thing I printed. I bought a bunch of large bottles of shampoo, then realized that they wouldn’t fit on the shelf in my shower. The ring in the picture holds the big bottle on top of a smaller bottle so that I can do refills without having to stand and hold the bottles (and it prevents me from making as much of a mess).

I realize that it isn’t much of a design – really just a ring, but the fact that I could make it exactly the size I needed, when I needed it was pretty cool. Here is a close-up of the ring when not in-use: 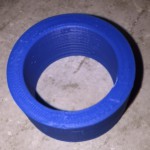 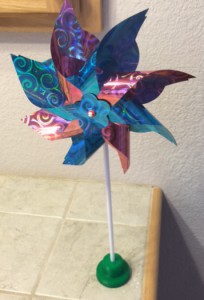 I also created a “windmill holder.” My wife was given a windmill for her birthday, and I figured it needed a stand to hold it upright. Although more involved than the ring above, still not much more than a bunch of circles. Here is what the 3D model looks like (note the cool rounded edges :-): 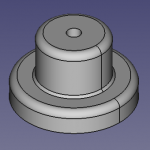 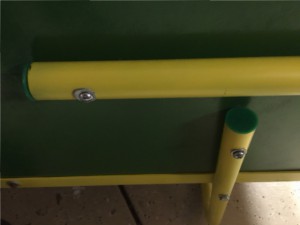 My wife rebuilt a wagon/wheelbarrow, and did a really nice job, but the struts ended in open pipes, so I printed some caps to cover them up: 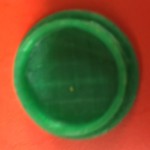 Yet another circular shape. This was not particularly planned–it just happened that most of the things that came up to be printed were round. Circles also tend to be fairly simple to make, and the printer makes some really cool hi-tech noises while printing. All of the green stuff is PLA, which I’ve learned is not a great material to use for anything that is particularly thin and tall because it tends to stay gooey for a while. The blue is ABS, which, so far, has given me the best, most reliable results.

The most recent thing I’ve printed was the roller core for a tape dispenser. I did this for a friend whose dog literally ate the original (or so he claims). 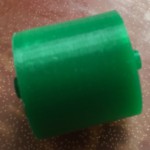 In this case, I didn’t create the model – my friend sent me a link to the model on Thingiverse. However, either my software had a problem with it or there was something wrong with the model, because it came up as being less than 1mm in size! I ended up using the scaling capabilities of Cura to get the main piece to be the correct size. I redesigned the rod for the core as two separate pieces to make it easier to get the size right.

I have done some other projects which I will talk about in another post, and I am starting working on some costuming-related projects as well. I promise that some of these actually contain angles!